but why people call it "Modu" ?

Shanghai has a nickname "Modu" or 魔都 in Chinese. This name is widely known and called by the youth in recent years. But what does this name mean? And where does it come from?

The word "Modu" first came up as the title for a book by Chinese writer Jianhui Liu who now lives in Japan. The book came out at 2003 and is about the recent history of Shanghai from Japanese peoples' perspective. 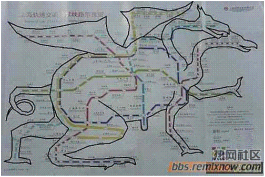 How did the word "Modu" become popular


1. The 34th episode of famous anime Chūka Ichiban! used the word "Modu Shanghai" as title.  It was a very famous anime in China and Japan and was shown on multiple TV channel for dozens of times.


2. The subway system of Shanghai looks like a demon dragon, which can be some what related to the word "Mo" (魔) in Chinese, meaning demon.


3. The Chinese word for "Mo" can also be interpreted as "being fascinating", together with the "Du", which means "city/capital", the whole word can have the meaning of "the fascinating city", which is what many people think of Shanghai.


4. There are may interesting stories about the city relating to superstition. You can read about them here.